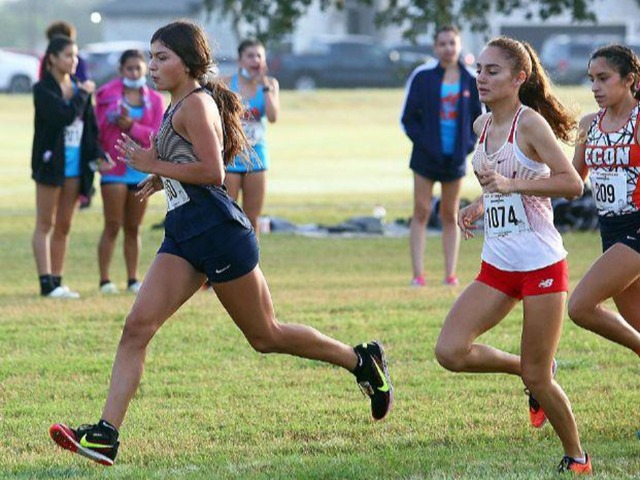 The sophomore distance runner switched up her diet while preparing for Saturday’s meet, decreasing her carbohydrate consumption, while eating primarily salmon, steak, seafood and vegetables.

Leal’s new diet and training paid its dividends, finishing with a personal record of 18 minutes, 57.2 seconds en route to a first-place finish in the Elite race division at the Monte Cristo Golf Course in Edinburg.

Leal’s victory marks her first of the season after finishing in the top 10 her previous four races, while also shattering her previous personal best of 19:30.

“At the start of the season, I was around the 21–, 22-minute mark,” Leal said. “Then, I started eating better and getting extra training. I knew I would PR and be in the top 5 but I never thought I would win.

“I do this for me and to boost my confidence. I want to prove other people wrong. I feel like I got this now. Hopefully I can win the next meet too.”

In the boys’ Elite division, PSJA North’s Hector Solis continued his dominant senior season, earning his third gold medal of the year with a time of 15:45.7.

Solis has now ranked in the top 5 in each of his five meets, including a pair of silver medal performances and one fourth-place finish.

“Getting this win is very great,” Solis said. “Honestly, it’s a confidence-booster. The district meet is coming up. This race has been one of my hugest accomplishments going into the district meet. I feel like I can still go a couple of more miles after this.”

While Leal and Solis dominated with individual performances, the McAllen Memorial Mustangs and Sharyland High Rattlers earned the top spot in the boys and girls elite division team standings, respectively.

The Mustangs had three top 25 finishers, led by senior Sebastian Salinas, who finished seventh with a time of 16:29.2. Meanwhile, the Rattlers had five runners in the top 25, including senior Danielle Salinas who came in second with a time of 19:13.4.

In the Sub 5A/Private/JV division, McAllen Memorial’s Abril Sanchez took first place in the two-mile run, clocking in at 12:45.7 seconds, while Lasara’s Jose Ventura ran away with the gold with a mark of 17:42.1, nearly 30 seconds faster than the next best runner.

Up next, runners prepare for their respective district championship meets, with the University Interscholastic League’s district deadline set for Oct. 16.