TWINS STEPPING UP FOR SHARYLAND 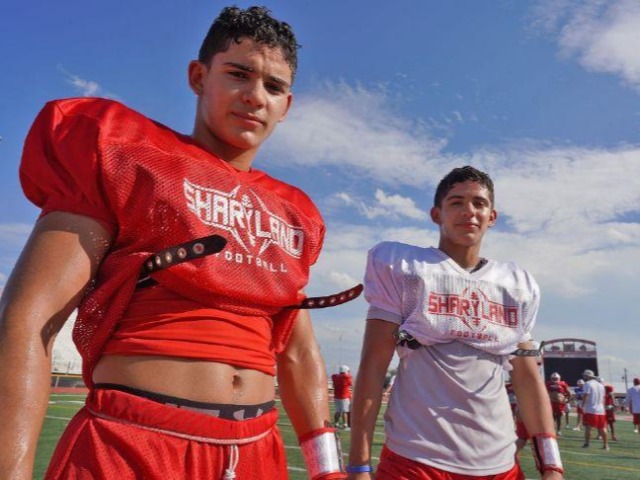 Twins stepping up for SharylandSep 19, 2021 11:26 AM
Twin brothers Alan and Alek Gonzalez have been terrorizing opposing teams on the gridiron since they were seven, beginning their careers as defensive lineman for their Pop Warner team.

As freshmen, the pair made the transition from JV to varsity for the Sharyland High Rattlers midway through the season, ending the year as the team’s starting defensive backs.

Alan and Alek, now juniors, have emerged as do-it-all playmakers for the Rattlers during their third season on varsity, ranking among the top on the team in receiving yards, tackles and turnovers caused.

“They’re growth has been good to see,” Sharyland High head coach Craig Krell said. “When they were freshman, we knew they had the abilities to play. They got tagged with a lot of penalties as they were young. That was just about them being aggressive and doing things that were not necessary. But they’ve grown up since then. That’s the good thing that I’ve seen year after year. I know next year they’re going to take another step and take it even farther.”

Despite being fraternal twins, Alan and Alek are hard to tell apart, sharing near identical physical traits. The duo’s stats on the field are also almost mirror images, separated only by 18 receiving yards and three tackles.

Defensively, Alan holds the edge as well, leading the team with 33 total tackles, adding one interception and one fumble recovery. Alek is not far behind, serving as the team’s third leading tackler with 28, while forcing three turnovers, including a 62-yard interception returned for a touchdown.

“We thought they were going to be a big part of both sides of the ball,” Krell said. “We knew that coming into the season.

“The thing is, I don’t think they’re in four quarter shape to play both sides of the ball just yet. But I know they’re working on that. They want to be out there every play. At this point, we’re holding them back to make sure they can last 10 games long. The more plays they’re out there, the more success they’re going to have.”

The twins said there is no competition on the field, both just hoping to see the other succeed. Off the field, however, Alan and Alek’s work ethic pushed the other to be great.

“Honestly, during workouts that’s when we get a little competitive,” Alan said. “It would be like I see him go to the gym, so I would go to. Or the other way around, he’d see me and there he would be.”

The offseason competitiveness has paid off for the twins, helping the Rattlers to a 2-1 record, including a 1-0 start in District 16-5A DII.

Alek said he believes it’s not only his bond with his brother, but also the team’s chemistry that has led to both their individual and team success.

“It’s fun sharing the field with him,” Alek said. “Looking to my left and seeing someone of the same blood as me, it’s cool. “But it isn’t just my brother. It’s the whole team. In the offseason, we would find random fields all over the Valley and just be out there running routes. Even our O-line would pull up and just be there with us. The chemistry on the team has really grown.”

Alan and Alek will look to continue to build off their early sea... Click here to read full article