XOCHI - THE VALLEY'S GOAT IN GOALS 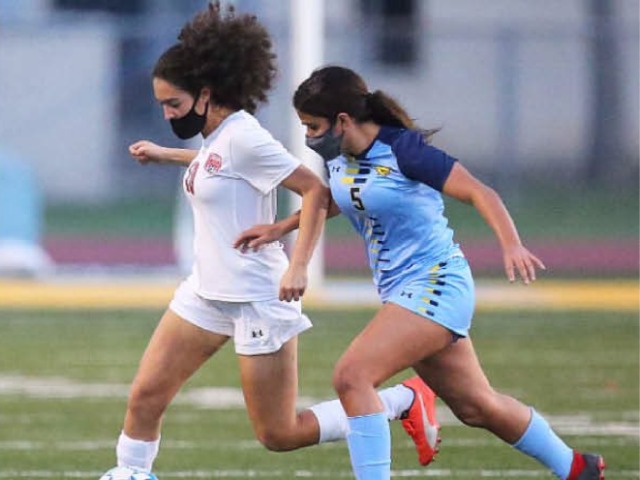 MISSION — The greatest athletes seem to be crowned with a single name, recognizable around the world. There's Maradona, Messi, Pele or Ronaldo. It's in every sport — there's Babe, Brady, Tiger and Jordan, lone monikers earned by being the elite of the elite in their sport.
When one has accomplished individual great things, one name will suffice.
Xochi.
In the Rio Grande Valley girls soccer scene, there's no reason for more. She didn't ask for it. It's catchy, unique and something that has been earned over time. Now is Xochitl Nguma's time.
During a year still dominated by COVID-19, Nguma is one of three Valley girls soccer players who are amazingly rewriting the record book. Coming into the 2021 season, former Sharyland High star Katie Watson (and one-time teammate with Nguma) held the Valley’s all-time career scoring record with 146 goals. This season, Campbell, Donna North’s Gabriella Aviles, and Sharyland High’s Xochitl Nguma have all shattered that record and continue to score at a breakneck pace.
Today, Aviles has 162 career goals, while Campbell sits at 170. Nguma is the Valley's all-time leading scorer, with 176. The three have dominated the pitch throughout their careers, scoring a combined 508 goals.
Donna North has five district matches remaining, Sharyland High has two and Edinburg Vela is done with regular season. All three teams are bound for the playoffs.
“When you talk about Xochi at Sharyland, you're talking about history,” Sharyland head coach Mario Ribera said. “What she has done is incredible; what she has done at the high school level is phenomenal.”
Ribera is in his fourth year coaching the Rattlers and his daughter, Chloe, who is also a senior like Nguma. The two have known each other since they were 6 years old and in the local youth leagues. Their chemistry on the field is obvious.
“Our chemistry on the off the field is unbelievable,” Chloe Ribera said. “I've never felt so comfortable with any other player before in my life. I'm proud to call her my best friend, if not my soulmate. She's my other half."
Ribera said Nguma was always a scorer, even at 5 years old. He also knew when he took the job at Sharyland that not only would Watson — who went on to set the Valley record — be on the team, but that “something big was coming up — Xochi,” he said.
“She could do what we call bells at 5 years old, where she dribbled the ball back and forth between her legs, all the way up and down the field,” Ribera said. “She even had a small goal setup, I think, in her house.”
Nguma couldn't recall her first high school goal (“there's been too many of them,” Campbell said, jokingly during an interview with all three), but she remembers the nerves of her first Rattlers practice.
“I was super nervous,” Nguma said. “I had been thinking about how I would get along with them since elementary school. Meeting them for the first time I thought they would be like full-grown adults and so well put together and intimidating. But they were nice and so super chill. It was a whole lot easier than I expected.”
Nguma has grown into a stunning player, an soccer assassin of sorts. Leave her alone for even the shortest amount of time and the ball will crash into the back of the net from just about anywhere on the field. She's strong, fast with the ball and an incredibly powerful shooter — with either leg.
Ribera vividly recalled a game where, for some reason, Nguma was feeling a lot of pressure.
“She was nervous for this game,” Ribera said. “Late in the game she got the ball from about 45 yards out, made a move to the left and put it in the upper corner of the goal. It happened so fast and it was phenomenal. It felt like the game had stopped after that.”
When Nguma arrived as a freshman at Sharyland, the Rattlers were led by Watson. Ribera said that by the time district play arrived, the two had found a connection, one that wasn't very pleasant for opposing defenses — the current all-time goal leader and the future all-time goal leader on the same side. Every game they played was like an all-star game, and they were the stars.
“Katie was a star, and she would do what she knew, push the ball forward and score,” Ribera said. “But when we started playing in district, the chemistry started as well. There were a lot of assists between them to one another. I think Katie inspired Xochi to score and she has, ever since."
Nguma scored 68 goals as a junior and has 48 during this shortened season with one regular-season match and the Class 5A playoffs remaining. Ribera said that the impact she has made on the team and the program will be long-lasting.
“Xochi has shown that it's possible, that anything is possible,” Ribera said. “She is leaving very high expectations for future classes and has been a grea... Click here to read full article

GONZALEZ SET TO WRAP UP CAREER AT STATE