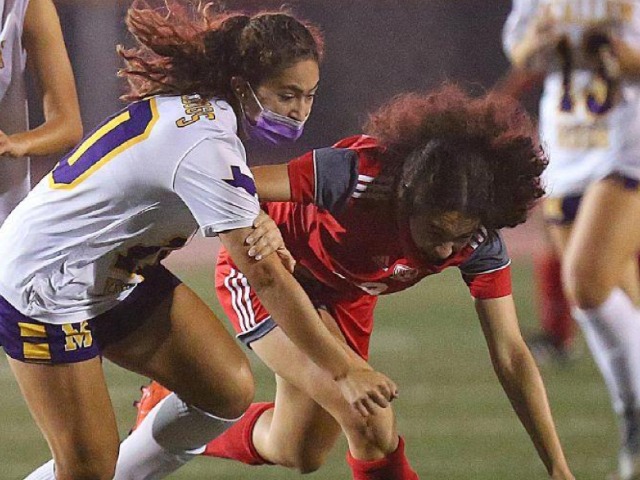 MISSION — With 45 seconds remaining during the first half, the Valley’s all-time leading goal scorer looked down and found the ball at her feet, 30 yards from the net.
Like a gunslinger from the Old West, Xochitl Nguma took no time to let a shot rip. The ball, however, was directly at goalkeeper Grace Kelly, who made the save. It was one of the few moments when Nguma had any breathing room away from Melanie Saldana, or the rest of the McAllen High defense.
Salinas led the defense, Mallory Henderson and Savannah Ruiz provided the offense and McAllen High dominated time of possession en route to a 4-0 victory over Sharyland High during the most highly anticipated girls soccer match of the season Tuesday night at Richard Thomson Stadium.
Sharyland High came into the match ranked No. 2 in the state by the Texas Girls Coaches Association, while McAllen High came in ranked No. 4.
Henderson scored three times, Ruiz came up big again in a big game and the Bulldogs turned a 1-0 halftime lead into a runaway with three second-half goals.
“To begin with, they are a great team,” Sharyland head coach Mario Ribera said. “They are amazing, no doubt. We did what we could with what we have and we were hanging with them in the first half, the best half we played and against a great team. But we had to be defensive and we got tired chasing the ball.
“Something that great teams do it finish, and the put it in the net.”
McHi improves to 7-0 overall and 3-0 in District 31-5A while Sharyland falls to 9-1, 4-1.
The game plan on paper was simple: stop Nguma, coming off a year when she scored 68 and currently has 156 in her career. Saldana was given that unenviable task. If she wasn’t there pestering Nguma, a host of Bulldogs converged on the scoring phenom like bees on a honeycomb.
The rest of the game plan was to do what the Bulldogs have accomplished all season: keep the ball with crisp passing, revering field and dominate time of possession.
“That’s not something you want to do, to man mark, but Melanie did the job and did it really well,” McHi head coach Pat Arney said. “(Xochi) is a great player and we had to keep a clamp on her and the girls did a really good job collapsing on her. It was here’s your best player and here’s out best player. Kudos to Melanie for doing a great job.”
McAllen High also won the battle of speed, using Henderson on the wing and splitting the defense with long passes for her to chase down. The first goal came from a Haley Nixon pass cross field for about 35 yards to a streaking Henderson, who fired a shot to the top left of the goal, out of reach of the keeper and a 1-0 lead.
“We worked super hard as a team this week and we were practicing through balls like that,” Henderson said. “Haley did a phenomenal job of finding me in open space and I finished.”
Henderson also scored in final goal on a similar play as the Bulldogs counter attacked after a Sharyland free kick. Briana Claudio brought the ball up the wing and saw Henderson in that same lane on the other side of the field. She laid the pass out perfectly, Henderson rocketed past the defenders and completed her hat trick.
“I saw that Briana had a lot of space and I had the whole back side and she found me. Perfect,” Henderson said.
Henderson’s goal came on a free kick from Ruiz. The ball came in low, bounced once the Henderson one-timed it for a 3-0 lead.
Ruiz, who scored twice in a match against city rival McAllen Rowe, also scored on a free kick from about 25 yards out.
“The coaches had both been telling me to shoot, so I figured I’d do exactly what they told me and hit that top corner,” Ruiz said. “I needed to play really aggressiv... Click here to read full article