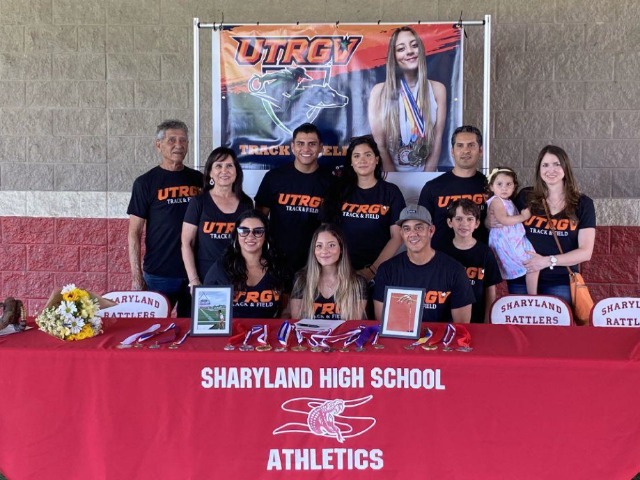 While playing in a game in eighth grade, her school’s track coach noticed Garza could jump a little higher than most. She was invited to give track and field a shot, and Garza immediately took to the pole vault like a fish to water.

“It was really cool. It was pretty awesome at first,” she said. “You kind of have to have no fear, and I didn’t. I just ran and jumped. It just feels like you’re flying, and I love that feeling.”

Since that moment in eighth grade, she’s been soaring over crossbars as one of the Rio Grande Valley’s top pole vaulters.

“My mentality is just to jump like it’s my last time, and try to clear the highest as I can,” she said.

Wednesday, Garza signed to continue her pole vault and academic career at UTRGV, the Rio Grande Valley’s Division I university, which competes in the Western Athletic Conference.

Garza said she’s fortunate to have the opportunity to pole vault at the next level in the place she was born and raised.

“It’s a blessing. I love that I’m going to be able to still vault in college,” she said. “It’s pretty amazing. It feels good to still have my family here and have their support.”

On the basketball court, she was an all-district player. Throughout her track and field career at Sharyland High, Garza is a three-time area meet qualifier and two-time regional meet qualifier. In 2019, she was crowned the District 31-5A champion in the pole vault, and the Area 31/32-5A champion. Last season, Garza finished fifth at the 5A Region IV meet.

But the feat that means the most to Garza is having her name in the Sharyland High record books. Her 2019 clearing of 10 feet, 4 inches set a school record for the Rattlers girls track and field team.

“It’s honestly an honor. I loved that experience. The day that I broke it, I couldn’t believe it,” she said.

Garza thanked her family, who were all wearing black UTRGV shirts with the name “Isabella” written on the back, for their support throughout her athletic career.

“It means a lot because they came out throughout this crazy time. ... Click here to read full article

GONZALEZ SET TO WRAP UP CAREER AT STATE