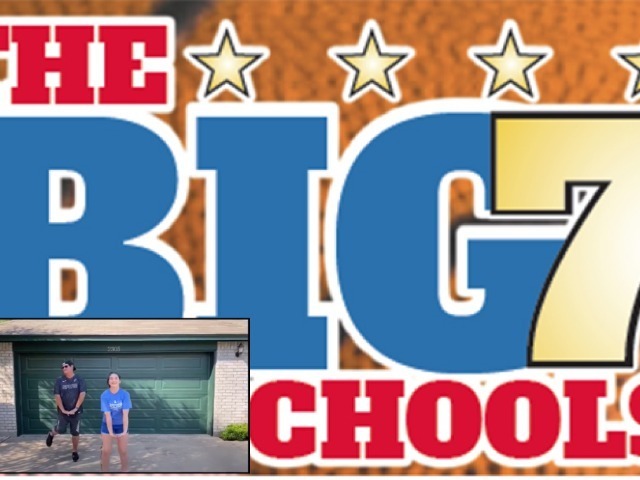 The UIL released a statement Friday, April 17 cancelling all high school sports for the remainder of the 2019-2020 season due to the COVID-19 pandemic. It wasn’t much of a surprise after Texas Governor Greg Abbot ordered all schools to remain closed for that same time period earlier in the day. It, for now, is the last step in a five week chain of events that is still hard to put into words. None of us have any real idea right now when we’ll get the chance to see a live game again.

However, even though the last five weeks have been without live sports; the teams, coaches and athletes of the Big 7 have been busy. When I first started this job a little over a year ago I didn’t follow twitter or even have an account but soon discovered it was a gold mine for keeping up with the happenings of the teams from the schools we cover.
The events of the last five weeks have not stopped it from being a source of information either. So I decided to cover one last sports event for the 2019-2020 school year. A glimpse via twitter posts of how the teams of the Big 7 kept things going in the face of news that over the course of those five weeks went from bad to worse.

The days between March 12 and March 15 were, for the most part, all about the games at hand. Twitter posts from LadyRattlers (the Sharyland High girls’ soccer team) celebrating a victory that clinched the district championship was one example. PHSSOCCERGIRLS (La Joya Palmview girls’ soccer team) posted about a season ending victory along with a thank you to the seniors for everything they did for the program. VMHS Patriot Baseball, the Mission Veterans baseball’s feed posted, “Great way to end the weekend. Great job Patriots!!!” Various track teams posted about the success of their athletes at local meets.

News from the outside, however, was starting to show concerns. The UIL announced on March 12 that the boy’s state basketball tournament in San Antonio was going to limit the number of people allowed in the Alamodome to watch, before finally postponing it altogether.

On Friday, March 13 the Palmview Lobos Baseball account announced “Our games were cancelled today at the Mike Rodriguez Baseball Tournament!” The Sharyland Pioneer baseball team had their tournament in San Marcos cut short. Later that day the UIL announced all state athletic contests would be suspended beginning Monday March 16 through March 29. Practices would be allowed. Patriot Football (the Mission Veterans football team page) sent out a tweet on Sunday, March 15. “REMINDER: Open weight room this week from 10:00 to 12:00.” Diamondback Baseball posted their upcoming week’s practice schedule the same day.

Before Monday ended the UIL suspension of contests had extended to practices as well and school districts began announcing their own closures. On Thursday, March 19 the UIL announced Monday, May 4 as the earliest that games could resume. In just a few days what had started as a two week break had turned into seven.

Reviewing twitter posts from that time until now has revealed a lot to me about the teams, coaches and athletes of the Big 7. Their desire to get better (or “grind” as many of today’s athletes like to call it) doesn’t stop.

Most of the teams that I follow began posting workouts for their players to do while at home. Those players began replying with videos of them doing those workouts and other activities that were keeping them prepared. Teams began posting screenshots of meetings they had in order to keep in contact with each other.

Besides the technical things posted, what I have found most impressive has been the tweets of motivation, care and optimism during this difficult time.

LadyRattlers tweeted,” It’s extremely important for you all to chat with your teammates. You don’t know how they are taking this. They need YOU.”

La Joya ISD Athletics joined others by turning on the La Joya ISD Pack Stadium lights and posting, “We are taking part in this symbol of hope and assurance that you are in our hearts and prayers every night.”, along with a stunning video of the event. Mission CISD and Sharyland ISD posted similar messages.

DiamondbackSoccer52 (Pioneer girls soccer) said,” Hard times are just an opportunity to show how strong, brave and relentless we can be when things aren’t going the way we want them. It gives us the opportunity to come together and accomplish the otherwise impossible.”

Just as important were the reminders to athletes to keep up with their academic work.

Of course there have also been a few posts that got myself (and others I’m sure) to chuckle a bit; something that always helps.

There is Patriot Football (head coach David Gilpin) sharing his good fortune after finding toilet paper and commenting, “Not as good as winning a state championship, but I certainly feel like I have accomplished SOMETHING!!!!”, or Sharyland Softball posting a video of head coach Paul Cruz and his daughter dancing away to Elton John’s “I’m Still Standing” in an effort to cheer up the rest of the team.

Of course with the most recent UIL announcement we can all use a bit of cheering up, but we should also not forget those who have seen their high school athletic careers come to a premature end. It is evident that their teams and coaches won’t.

Right before the UIL suspended all contests, Diamondback Baseball posted, “Not giving up yet. Hoping and praying @uiltexas gives seniors a chance to finish in some way, shape, form.”

Once the suspension was announced the tributes, thoughts and thank yous began.

Palmview Lobos Baseball tweeted, “We are Heartbroken. In disbelief that something like this would happen! Seniors we are so sorry that this happened to you, life is tough sometimes, but we believe that this will only make you stronger and appreciate what’s more important in life! Thank you 1, 3, 12, 15 and 85!”

DiamondbackSoccer52 posted,” My heart goes out to our Seniors. Stay positive! Stay strong! Stay safe! You are all destined for greatness.”

And finally, from Lady Diamondback Track and Field:

“To our seniors . . . Always remember success in life comes from when you refuse to give up. You possess goals so st... Click here to read full article