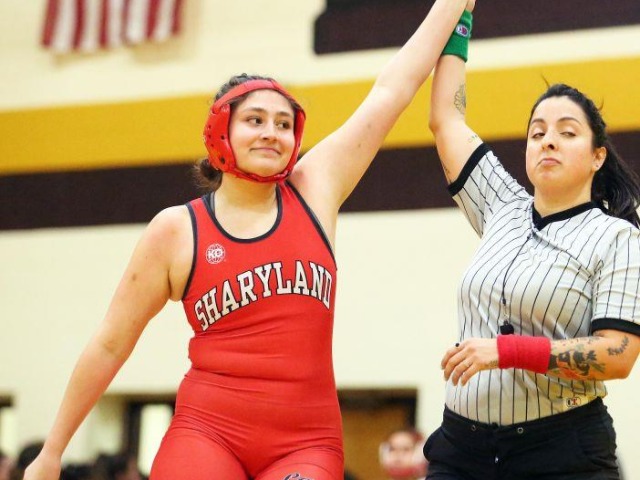 DONNA — “Boom baby,” Sharyland High head coach James Penbrook shouted with enthusiasm soon after the final match that secured the championship for the Rattlers on Thursday at the District 16-5A Girls Duals.

His wrestler, 165-pound Kiarra Suelto, had defeated Donna High’s Amaya Guerra by major decision, worth four points, that broke a 24-24 tie to clinch the Rattlers’ 28-27 victory over the defending duals champions Donna High.

“All four teams who made the semifinals were tough,” Penbrook said. “It was a hard fought battle, and we were glad to come out on top.”

Heading into the match, the Rattlers were down a wrestler after Mary Jane Sustita ended the day with an arm injury during her semifinals match.

It turned out to be the fire needed to motivate the Rattlers and redeem themselves from their third-place finish last year.

Late in the second period, Guerra slammed Suelto into the mat driving her shoulder down as she crashed on to her body. It looked as if the match would end there, as trainers and coaches huddled over Suelto, assessing any possible injuries.

Minutes later, Suelto rose from the mat and assured the referee she wanted to continue.

“I didn’t want to suffer another injury for my team, so I just pushed through it to win for our team and Mary Jane,” Suelto said. “Our team is outstanding and today we proved that.”

Had Suelto not been able to continue, it would have cost the Rattlers the title, and Donna High would have won.

Leading up to the tie-breaker, Sharyland High’s Jerylin Peralez, ranked No. 20 in the state in the 95-pound weight class according to wrestlingtexas.com, faced Donna High’s Nelly Gutierrez. Peralez wrapped her arm around Gutierrez’s head and slammed Gutierrez to the ground in a violent jolt to the mat that ended in a loud slam.

The power move led to Peralez pinning Gutierrez 53 seconds into the second period.

“All of us decided we wanted to win this for her (Mary Jane Sustita) and hopefully she will come back and start wrestling again,” Peralez said. “Her opponent arm chopped her (Sustita) and dislocated her elbow.”

“It came down to that final match and she won by fou... Click here to read full article