MERCEDES TAKES DOWN SHARYLAND IN OVERTIME 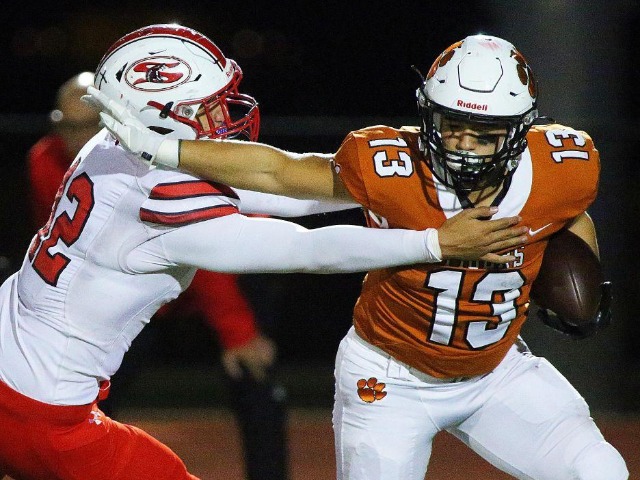 MERCEDES — After 48 minutes of football, the Mercedes Tigers and Sharyland Rattlers required overtime to settle the score of their District 16-5A DII battle Friday night at Tiger Stadium.
The Tigers began the extra period with the ball, and on the first play from the 25-yard line, sophomore quarterback Mike Cisneros floated a ball to the corner of the end zone in senior receiver Alex Rincon’s direction. With a Sharyland cornerback on him like glue, Rincon located the ball, extended his arms toward the sky, secured the rock in his hands and tip-toed into the end zone for a Mercedes touchdown.
But that was just half the battle. It was the Rattlers’ turn to try to match the score, but the Mercedes defense denied Sharyland High from reaching paydirt as the Tigers held on for a 35-28 victory in overtime. The win sends Mercedes to 5-3 overall and 3-1 in district play, while Sharyland drops to 4-5 on the year and 2-3 in 16-5A DII action.
“The excitement, that’s what makes Friday night football the king in Texas and in the Rio Grande Valley,” Mercedes head coach Roger Adame said. “The kids had to overcome adversity and I’m proud of them. Sharyland has a well-coached team and fought to the end. We came out on top in this one, but it was two good teams going at it.”
Cisneros and Josiah Cantu carried the Tigers out to a 28-14 lead to start the fourth quarter, but Sharyland High stormed back with 14 unanswered points to tie the game after touchdowns from Robert Mancha and Benji Valdivia.
A 40-yard missed field goal from Mercedes at the end of regulation sent the game into overtime, but that’s when Rincon, a senior, stepped up for his team.
“Alex has been wanting the ball, he’s one of our leaders and offensive captains and had been asking for the ball,” Adame said. “He said, ‘Coach, throw me something. I’m not going to let you down.’ We took a chance on it. We took chances all night, that’s what you have to do against good teams to get a win.”
Rincon gave credit to his quarterback and team for staying in the fight until the final bell.
“I just think there was no other way Mike could have put that ball. I give all props to him. He puts in work every day, our receiving core puts in work, and it’s showing on the field,” Rincon said. “I feel like Coach made me a captain for a reason, in circumstances like these to come up big and make a play for the team and for the community.”
Once the official raised his hands, signaling a Mercedes touchdown to start overtime, the Tigers defense knew it was its turn to shine.
“That gave us a lot of fire right there, knowing our offense could score like that,” Mercedes linebacker Brandon Adame said. “That lit a fire in us and we wanted to go out there and get that key stop to get this game over with. It was all effort, that’s how we play defense here at Mercedes. We fly to the ball and we hit hard.”
The Tigers are now in a prime position to capture one of the four playoff spots up for grabs in 16-5A DII.
Just what does the hard-fought district win over Sharyland say about the 2019 Tigers?
“It lets other teams around the Valley know that we ain’t no joke. We’re coming here to win,” Cisneros said.
Next up for the Tigers is a road game against Laredo Cigarroa (1-7, 0-4) at 2 p.m. next Saturday.
Meanwhile, the Rattlers will close out their regular season in Week 10 as Sharyland High hosts Valley View (2-6, 0-4... Click here to read full article