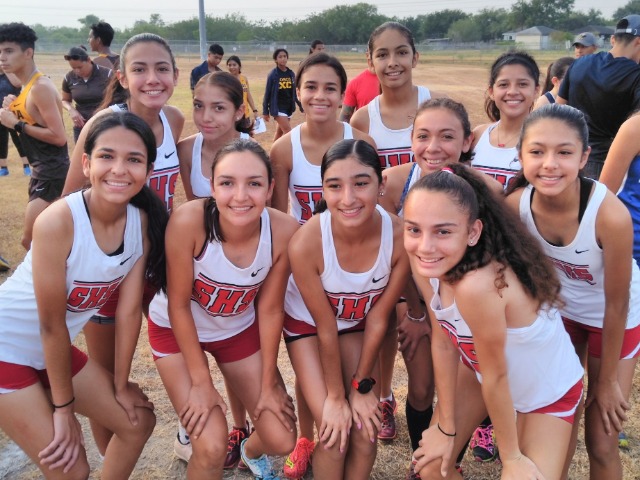 SAN BENITO — Right from the shotgun start, something was different about the 21st annual Dog Pound Invitational.

Cross country mainstays like Brownsville Hanna and Harlingen High were right in the thick of things again Saturday morning, but the Greyhounds took home their first title in the varsity boys division behind strong performances from Joaquin Medina (16 minutes, 45.12 seconds) and Marco Salinas (17:55.24) in the 5K race on the team’s multi-surface home course.

“We wanted to make history,” Medina said moments after triumphantly raising a purple “SB” flag atop a pole attached to his pickup truck. “We were telling each other, ‘Hey man, we can do this.’ We needed to just push our pace and have a good mentality.”

Said San Benito boys coach Mark Buddle, “That was huge. We had all five of our boys in the top 17, and that was a massive breakthrough for us. We haven’t had that ever before. And they don’t even want to go home.”

Buddle said his team’s historic day is a step in the right direction for the program to close the gap between the Greyhounds and the Golden Eagles and Cardinals.

“I kept telling them, ‘If we do that, we’re going to start winning some meets,’” Buddle said. “‘Well, gee, coach isn’t just blowing smoke, this is real.’ The cool thing is they worked hard, and then they had this success. I mean, I’ve been praying all week, it’s like I’ve been praying for it in tongues or something. But it happened, and we just thank God that he saw fit for us to run hard.”

“I can’t really hold the pace by myself,” Medina said. “So I’m glad that (Reyes) was up there so that I could hold the pace.”

San Benito recorded 51 points to finish atop the standings, followed by Brownsville Hanna with 69 and Harlingen High with 87. The Golden Eagles’ trio of John Abrego (17:02.03), Felipe Parra (17:08.34) and Marcos Tellez rounded out the top five.

Buddle quipped that his runners were so excited that they didn’t seem in any rush to leave after the meet.

The Greyhounds were indeed a jubilant bunch, celebrating by blaring the Texas Tornados’ 1990 hit song “Que Paso (Hey Baby)” from Medina’s truck in the parking lot.

“Today we showed up with a strong mindset and good effort,” Medina said. “We made a good showing today.”