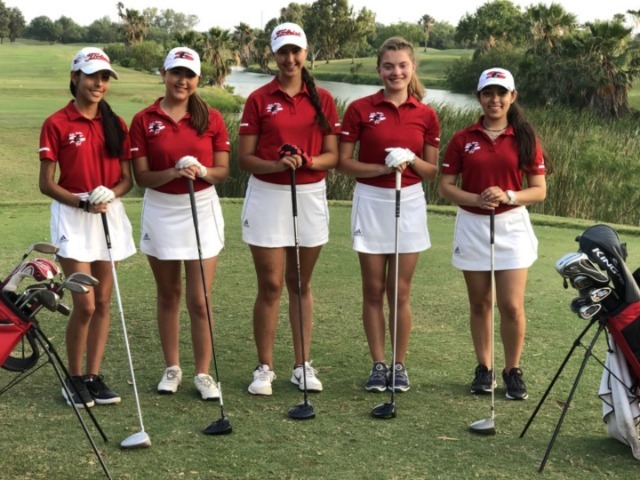 McALLEN — Carolina Cantu woke up one morning and realized that her senior season on the Sharyland High girls golf team wasn’t going so well.

She decided right then to do something about it.

“I decided to try to play boring golf — on the green in regulation and two putts,” the senior said while practicing with her team at Palm View Golf Course. “I was getting decent scores but not the ones I’d like.”

That decision led her to the District 31-5A title and a fourth place in regionals. Now she leads the team to the UIL Class 5A state championship beginning today at Whitewing Golf Club in Georgetown. The Rattlers, featuring Cantu, Maialen Erana, Gabriela Osuna, Paulina Flores and Samira Salinas will pair with Abilene Wylie and Magnolia high schools and begin teeing off at 9:10 a.m. from the No. 10 tee box.

While golf is a game of consistency, the Rattlers have shown that consistency as a whole, making this trip their seventh straight to the state tournament, something that’s not lost on any of them.

“I definitely didn’t want to be on the team that ended that streak my senior year,” said Cantu, whose 78 and 77 led her to that district title, one stroke ahead of Briana Silerio of La Joya Palmview, who is also going to be state-bound as one of the individual qualifiers.

Ashley Garza is in her second year at the helm of the Sharyland golf team and knows the additional pressure that comes with the long streak of success. Being on maternity leave for two months during the season didn’t do anything to lessen that pressure.

“It’s big pressure to have to uphold this, but we want to do that,” Garza said. “As for the tournament, the past couple weeks we just wanted to hit every day. Don’t try to fix anything and play with what you have. Focus on the mental game and the short game.”

Maialen Erana is a junior making her first trip to state. She said the key for her is staying focused and she has worked all season on improving the mental aspect of her game.

“I really struggled at one point this year and have worked hard on that to be confident with myself and with my game,” she said, adding she has a little routine for every practice. “I have to make sure the final shot I hit is a good one.”

Erana’s older sister played at Sharyland and is now at St. Edwards playing. She said that just added expectations because “I want to do well for myself, the team and my sister.”

Cantu remembers how the juniors and seniors led the team when she first started with the Rattlers. She said she wanted to be able to do the same and now she’s hoping to help bring out the best in them starting today for the two-day event.

“This year has been completely different than it was my previous years,” she said. “I’m hoping to be a good leader and help the girls play their best.”

Freshman Samira Salinas led the team this year in district rounds with a scoring average of 80.8, followed by Cantu at 82.62.

Last year the Rattlers finished second and was seeded fourth. This year, they are tied for sixth with Alamo... Click here to read full article